The air freight market could level off during the coming year and present new opportunities for global shippers.

According to IATA, air freight demand, which is measured in freight tonne kilometers (FTKs), rose 3.1% in October 2018, compared to the same period the year before. This pace of growth was up from a 29-month low of 2.5% in September. Freight capacity, measured in available freight tonne kilometers (AFTKs), rose by 5.4% year-on-year in October 2018, IATA reports. This was the eighth month in a row that capacity growth outstripped demand. 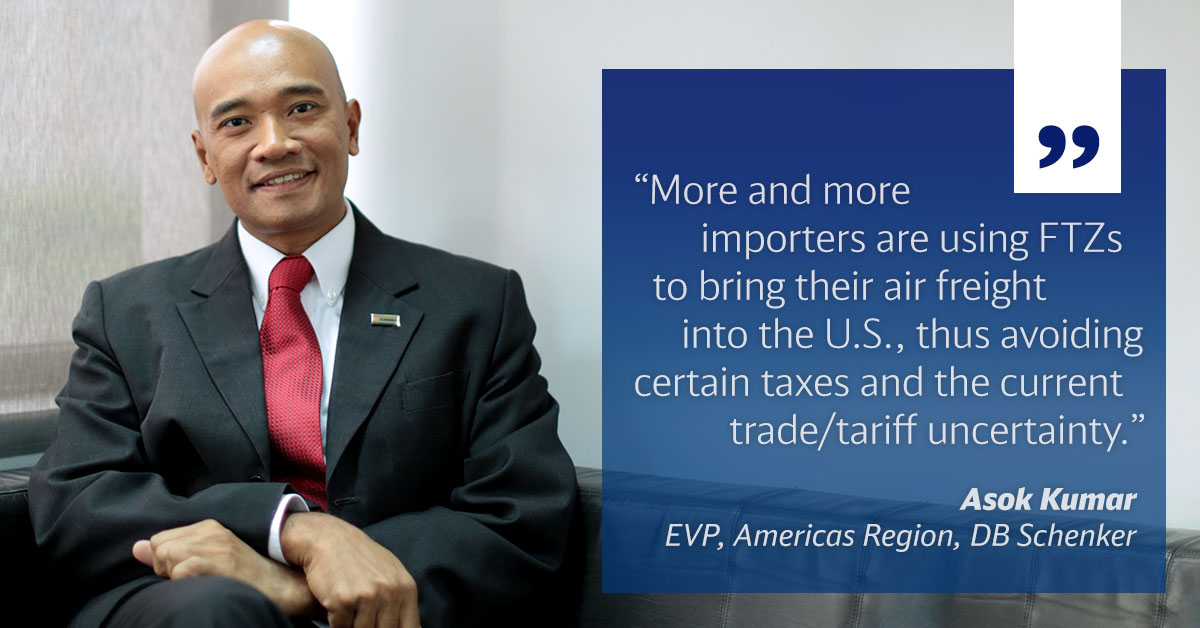 IATA says that while growing international e-commerce and an upturn in the global investment cycle are supporting industry growth, demand continues to be negatively impacted by a contraction in export order books in all major exporting nations in October; longer supplier delivery times in Asia and Europe; and weakened consumer confidence (compared to very high levels at the beginning of 2018).

“Cargo is a tough business, but we can be cautiously optimistic as we approach the end of 2018,” IATA’s Alexandre de Juniac said in a press release. “Slow but steady growth continues despite trade tensions. The growth of e-commerce is more than making up for sluggishness in more traditional markets. And yields are strengthening in the traditionally busy fourth quarter. We must be conscious of the economic headwinds, but the industry looks set to bring the year to a close on a positive note.”

For 2019, Kumar expects the air freight market to remain flat, with no expectations for any significant upsurge or spikes in demand. Any growth will likely be in the low single digits globally, he predicts, with certain markets stronger than others. For example, Transatlantic and U.S-Europe routes are both “pretty strong” right now and holding their own, Kumar says. The Latin American lane is already reasonably strong, he adds, while the Transpacific lanes have leveled off—likely due to the China-U.S. trade tariffs and the related instability.

“That could be one reason why the Transpacific lane is seeing lower air freight volumes right now,” says Kumar. In 2019, shippers will continue to be impacted by the trade wars and by geopolitical forces like Brexit, which remains in flux at press time. “At this point,” says Kumar, “the outlook for air freight for 2019 really is contingent upon what happens with some of these issues.”

The current leveling off of the air freight market could present opportunities for shippers in some lanes, and particular since 2018’s peak season never actually came to fruition across many of those lanes. However, Kumar cautions shippers not to assume that rates will fall just because capacity increases. “It’s a function of supply and demand,” Kumar explains. “If demand isn’t strong, carriers will pull capacity out of the market which, in turn, becomes tight again.” That creates a situation where rates hold steady instead of falling—a scenario that played out during the second half of 2018.

“While demand may not have been what was expected, air freight supply was actually quite balanced,” Kumar points out. “It wasn’t one of those crazy peaks, where there is no capacity and shippers have a hard time getting space. It also wasn’t ‘open season’; carriers held their rates across most trade lanes.”

For 2019, Kumar says most shippers probably won’t run into too many challenges when securing air freight capacity, and that they should expect to pay rates similar to those of 2018. “I don’t anticipate very many rate increases in the market, and particularly not outside of peak season,” Kumar says, “where overall market rates tend to move upwards.”

Right now, Kumar says shippers are looking outside of China for manufacturing capabilities and using Free Trade Zones (FTZs) to streamline and remove costs from their global supply chains. These are areas where goods may be landed, handled, manufactured or reconfigured, and reexported without the intervention of the customs authorities. “More and more importers are using FTZs to bring their air freight into the U.S.,” says Kumar, “thus avoiding certain taxes and the current trade/tariff uncertainty.”

Overall, Kumar says the relatively stable air freight market should remain predictable in 2019, with no extraordinary cost increases or other uncertainties rearing their heads. “That’s good news for shippers, who can better plan their budgets and costing for the year ahead,” says Kumar, “without having to pay exception rates because they can’t move their freight expeditiously.”