4 Tips for Managing the Next Chinese New Year

The Chinese New Year is right around the corner. Is your supply chain ready for the Year of the Dog?

It’s the time of the year businesses throughout China shut down, factories cease operations, and activity at the country’s transportation hubs come to a grinding halt. Known as the Chinese New Year, this revered national holiday presents a unique set of challenges for importers and exporters alike.

The most important social and economic holiday in China, Chinese New Year was originally tied to the lunar-solar Chinese calendar, and was a time to honor household and heavenly deities as well as ancestors, according to History.com. During this period, the entire attention of the household is fixed on the celebration, business life rolls to a halt, and home and family become principal focuses.

“All workers will travel throughout the country to return to their families and celebrate the New Year, with all manufacturing shutting down for the duration,” Global Trade Magazine reports. “For U.S. companies importing or exporting goods from and to China this can be a considerable challenge.”

This year, the official dates for Chinese New Year are from February 15 to 21. However, most factories will stop operations until March 2. One to two weeks before the holiday, Chinese factories “speed up” their production, causing a surge of freight. And during CNY, those facilities close down completely, with production generally back to normal one to two weeks after the holiday.

And while it’s too late to take proactive steps to deal with the 2018 Chinese New Year, here are four things shippers should be doing now to manage holiday-related impacts: 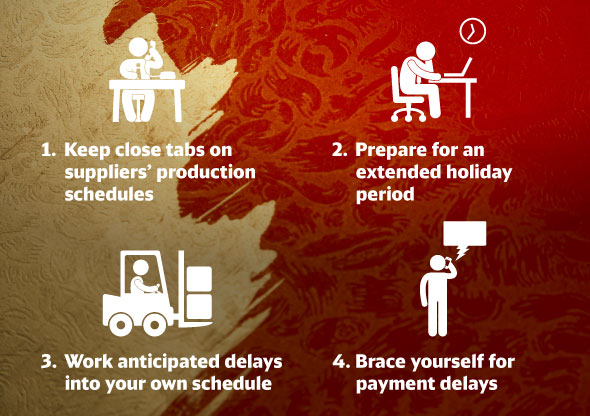 Chinese New Year in 2018 fell later than usual. Next year it will be two weeks earlier in the Gregorian calendar, so shippers will need to make good plans for Spring sales. Knowing that Chinese New Year takes place every year—and that the 2019 holiday will kick off on February 5th—importers and exporters should plan ahead and take proactive steps to secure shipping capacity, negotiate rates, work closely with logistics partners, make arrangements with their suppliers, and keep their supply chains running smoothly even as business activity in China comes to a standstill for the national holiday.