5 Technology Trends Worth Watching in 2018 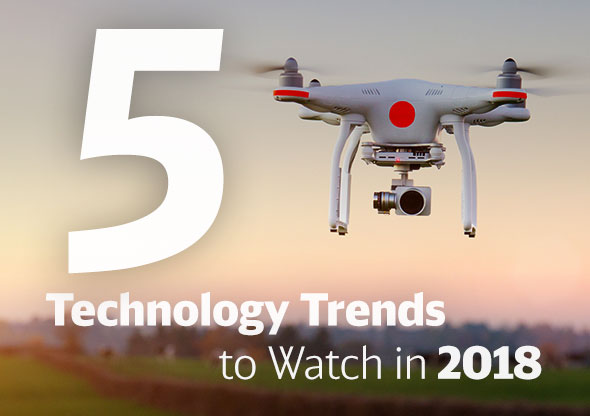 Interested in the latest and greatest technology for work and life? Here are five things to look for at CES 2018 in Las Vegas

Every January the top technology companies convene at CES to reveal and demonstrate their latest innovations. First held in 1967, the show started with just 117 exhibitors and has since grown to more than 4,000 tech firms and 180,000 attendees (at CES 2017 in Las Vegas). Owned and produced by the Consumer Technology Association, CES is a “launch pad for innovation that changes the world,” according to a show press release.

According to CES, some of the innovations it has showcased include the VCR (1970), the DVD (1996), digital radio (2000), and Blu-ray recording standards (2002). More recently, the expo floor has been graced by consumer 3D printers, AR/VR, artificial intelligence, smartphones, tablets, self-driving vehicles, 5G wireless, the Internet of Things (IoT), drones, and 4K Ultra HD Television.

As technology continues to evolve and advance at the speed of light, the number of new innovations meant to help us live and work better is expanding exponentially. Here are five tech trends to watch for the year ahead:

CES is a global consumer electronics and consumer technology tradeshow that takes place every January in Las Vegas. For 2018, the event is being held January 9-12 at Mandalay Bay.