DB Schenker Honors Those Who Served Their Countries

When Hessel Verhage moved into the role of CEO for DB Schenker’s Region Americas last year, he brought his nearly 30 years of experience in the logistics industry along with him. A U.S. Army veteran, Verhage is also a veteran who delivers a high level of discipline, expertise, and commitment on every job that he’s tasked with.

Responsible for 24 countries in North, Central, and South America, Verhage began his logistics career driving a forklift and was later promoted to supervisor. “I worked my way up,” says Verhage. “Along the way, I had some really good mentors who helped me and others who cut me some breaks.” 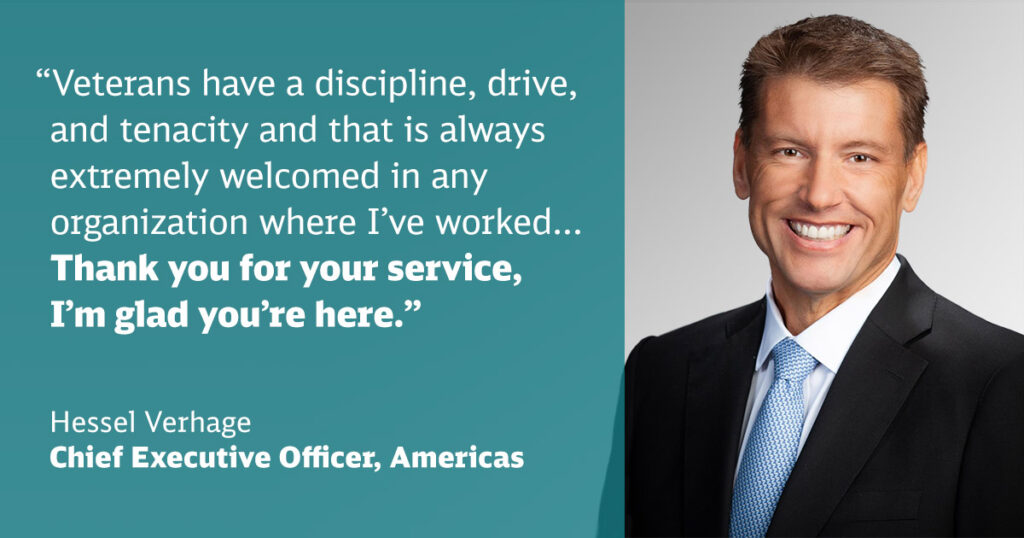 When Verhage learned about the CEO opportunity at DB Schenker, he started thinking about what would go into taking a large, established logistics leader and helping it adjust to the new realities of the logistics field. “Logistics is changing fast, and it’s creating some challenges for the companies that are operating in it,” says Verhage. “That was my catalyst for joining DB Schenker.”

Ready to be a part of change, Verhage has full operational profit and loss (P&L) responsibility for the 11,000-employee Americas region. “I’m really looking forward to the challenge, and I’ve already found a lot of great people around me to work with,” says Verhage. “At the end of the day, we all use the same ships, planes, and trucks. It’s our front line people who truly make the difference.”

Taking on a Whole New Life

Born and raised in Holland, Verhage was in high school when he moved to the U.S. with his mother, who is American. After graduating, he knew he wanted to go to college but lacked the funds, so he enlisted in the U.S. Army. Opting for a shorter enlistment time and a maximized GI Bill opportunity (which would pay for college), 18-year-old Verhage signed up.

“America hadn’t been at war since Vietnam, so I signed up and started boot camp in 1990,” he recalls. “Saddam Hussein invaded Kuwait a month later, and life changed dramatically. At boot camp, we were actually being prepped to go to war, so I took on a whole new life.” Wounded while serving in Desert Shield (the name was later changed to Desert Storm), Verhage returned home to yet another whole new world—one where he had to apply his military experience in a career setting.

This Veteran’s Day, DB Schenker honors its employees who have served their countries and their families. “Veterans have a discipline, drive, and tenacity and that is always extremely welcomed in any organization where I’ve worked,” said Verhage. “I really like having veterans on my team, and not just for nostalgic purposes, but because they’re disciplined and focused and know how to get stuff done.”

To DB Schenker’s many team members who have served and to veterans everywhere, Verhage offers a message of gratitude and thankfulness. “Thank you for your service,” he says, “I’m glad you’re here.”