Eric Clapton played “Layla” on one. Pink Floyd’s legendary albums would be ­unthinkable without its sound. John Lennon had one with gold hardware. Jimi Hendrix made Rock’n’Roll history with one at Woodstock. And Fender’s Stratocaster, or Strat for short, is still the one-and-only electric guitar for legions of young musicians. In New York and Los Angeles, in London and Berlin – and in Tokyo and the rest of Rock’n’Roll crazed Japan! 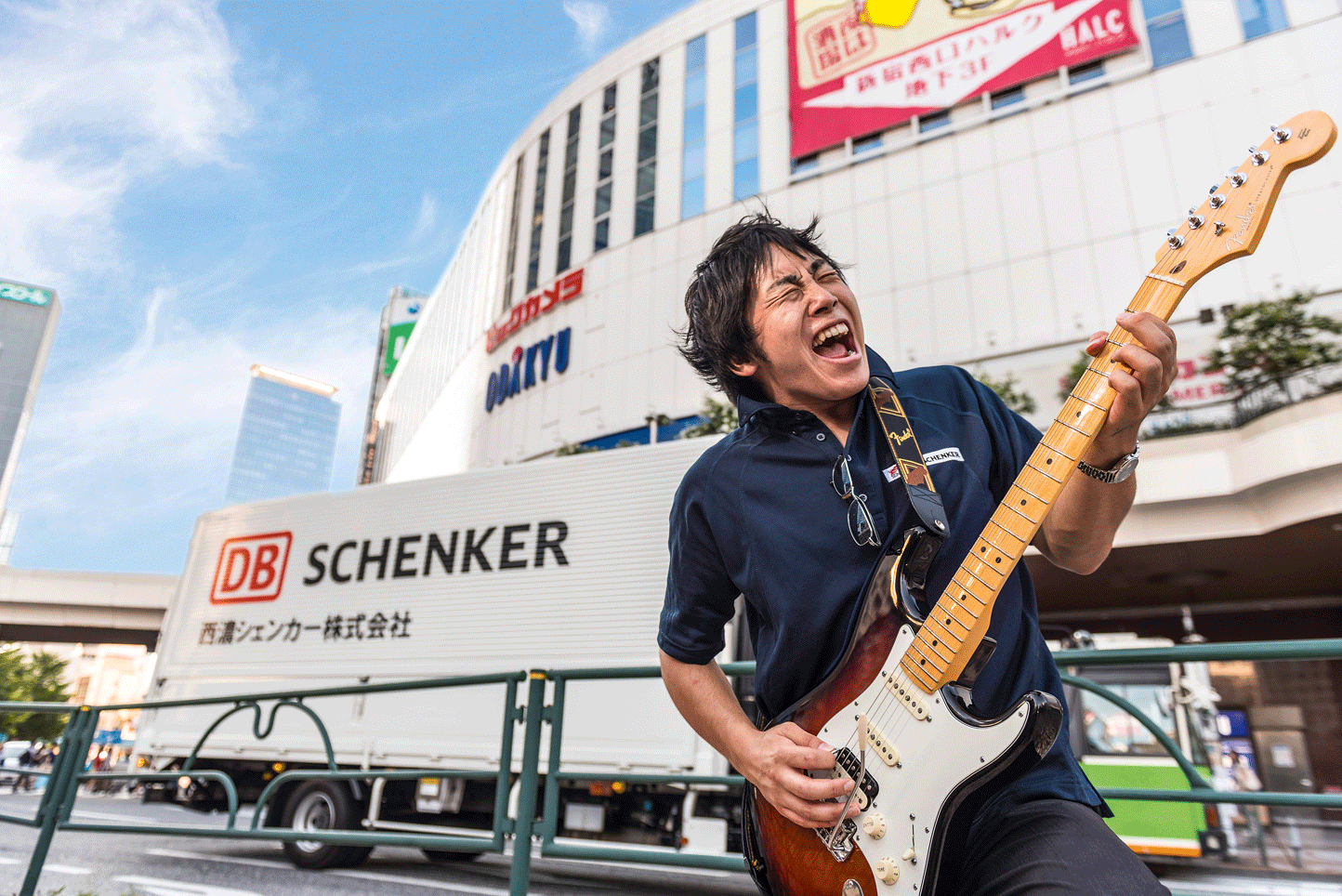 Ensuring Japan’s guitarists have constant access to plenty of instruments from the guitar-makers from the Grand Canyon state of Arizona – and much more – is now the task of Schenker-Seino.

The job begins with importing the instruments. “We manage about 250 ocean freight containers on average per year and some air freight for Fender,” says Braeden Reif, Head of Business Development at the Japanese subsidiary of DB Schenker. The shipments include not only the guitars but also hardware and amplifiers with the unmistakable Fender logo. The biggest part of the cargo comes to Tokyo from the US, where the renowned company has its primary factory in the city of Corona in southern California. Schenker-Seino manages the entire distribution chain within Japan. “We deliver to 250 music shops,” says team member Kou Shimoda. The 28-year-old was instrumental in designing solutions for the new customer. Most of the shipments are sent by truck, but some go by air. The hub for the entire operation is a single warehouse in Tokyo, where Schenker-Seino has a 4,000 square meter area just for Fender. Previously the company had used seven locations for the distribution. The logistics center is only 15 kilometers from the port and 20 kilometers from the Tokyo Haneda airport. Considering the dimensions of the greater Tokyo area with its population of 37 million, both routes are just a stone’s throw away. “Like most musical instruments, guitars are extremely sensitive to just about everything,” says Kou Shimoda, who plays the saxophone and is a fan of the Britpop group Oasis. Bumpy rides inflict real damage on the instruments, ambient temperature and humidity must be kept within a specific range. For these reasons, no guitar leaves the warehouse without a quality test.

This task is undertaken by experts from Fender in an on-location studio with a soundproofed chamber. “Members of our team provide support,” says Kou Shimoda. That goes for the testing itself, but primarily for the value-added services: unpacking, repacking and providing the necessary documentation for the freight prior to delivery. 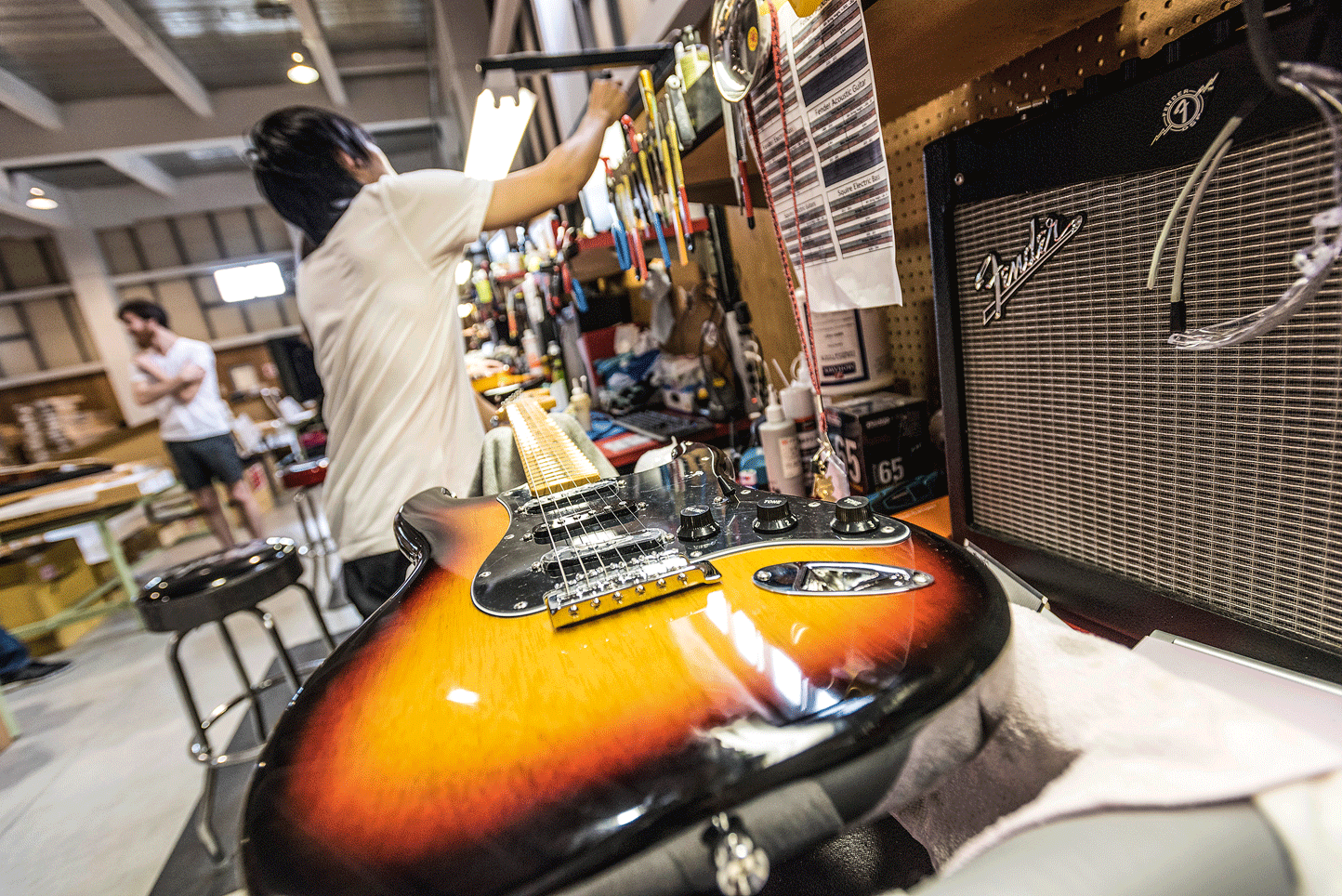 “The logistics involved in our business are demanding, especially in such a dynamic and service-oriented market as Japan. But we know we have a strong, fast-reacting partner by our side with Schenker-Seino,” says Edward Cole, President Fender Asia. “It’s a thrilling job!” confirms Braeden Reif – not only the thrill of the Rock’n’Roll feeling that comes with every guitar delivered but also the thrill of getting an operation on its feet in record time. There were only two months between the final agreement with Fender and the kick-off of operations this spring. “Our entire team, in cooperation with Fender, went all out to make sure we could start so quickly,” says Kou Shimoda. “And it’s a job with lots of potential,” adds Braeden Reif. An export service to other Asian countries is in development. The road transport within Japan is being expanded to include partial load shipping. Next year Schenker-Seino could take over the e-commerce business that Fender is developing in Nippon. No question about it: Schenker-Seino and Fender are rocking Japan!