Historically, we’ve seen a “low season” in the cargo airfreight industry at least once a year, where carriers, logistics providers, and shippers who rely on this service can take a breather knowing that capacity will be available and rates will be low.

Not this year. In fact, it’s been peak season for much of 2017, and that trend is expected to continue.

The trend started last year, and only picked up steam in 2017. According to Air Cargo News, figures from analyst WorldACD show that the air cargo industry had the best peak season in years in 2016, with demand growth recovering from a slow start and yields improving at their fastest pace since 2010.

In 2017, the trend continues. In June, for example, volume increases hit 10.5% year-on-year, according to WorldACD, while yield rose 7% worldwide. And Q2 2017 volume growth was the best it’s been in nearly seven years, with yields rising 5.4%

“What we’re seeing now is very different from what we saw pre-2016, when there were predictable low seasons for airfreight,” says Benno Forster, Head of Airfreight USA for Schenker, Inc. “Shippers are accustomed to having clear-cut peaks (usually in the spring and fall) and a low season (generally in the summer months). But 2017 is the first time we’re just not seeing that.”

No Slowdown in Sight

Transpacific routes between the U.S. and Asia have been particularly busy for the entire year, for example, and aren’t expected to throttle down anytime soon. Both inbound and outbound routes are busy right now, says Forster, during a time of the year when business tends to slow.

For shippers, this trend can translate into capacity strains and higher rates. “Capacity is pretty valuable right now coming into peak season (i.e., the looming holiday season),” says Forster, who predicts that the pending release of hot consumer electronics like the new iPhone and the Amazon Echo Dot will consume a good portion of the airfreight capacity in the coming months.

“These electronics manufacturers are very innovative and are always bringing new gadgets to the market,” says Forster. “Something like the release of a new iPhone can really impact airfreight and force us to plan around capacity constraints – in an environment that’s already reached its peak.” 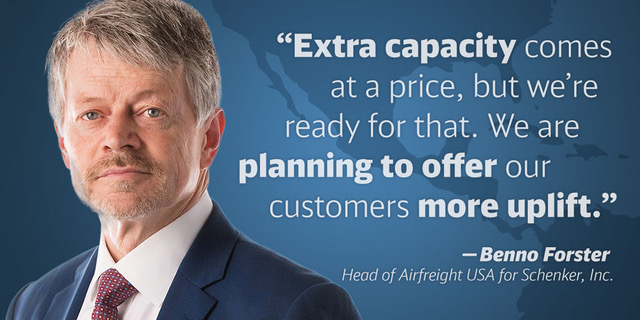 To offset the challenges created by an ultra-busy airfreight environment, Forster says Schenker, Inc., is acquiring additional airfreight capacity. Obtaining more freighter space ensures that space is more likely to be available when shippers need it. “Extra capacity comes at a price, but we are ready for that,” says Forster. “We are planning to offer our customers more uplift.”

What can shippers concerned about airfreight’s perpetual peak season do? Forster says one of the best steps is to simply put more time and energy into your forecasting. This isn’t the time for last-minute planning. By taking the time to produce accurate forecasts—and sharing them with your logistics providers—you’ll be able to shift from reacting to challenges to proactively managing capacity. “The better forecasts we have,” says Forster, “the more accurately and successfully we can plan, procure capacity, and accommodate a customer’s airfreight needs.”

Forster says shippers should also keep up on the trends and understand that issues like staffing at airports can interrupt the smooth flow of airfreight. “It’s also peak season for all airline ground handlers, which means that the airlines will be struggling to have enough staff on-hand for the holiday season,” says Forster, “and particularly in the busy gateways like Chicago and New York.”