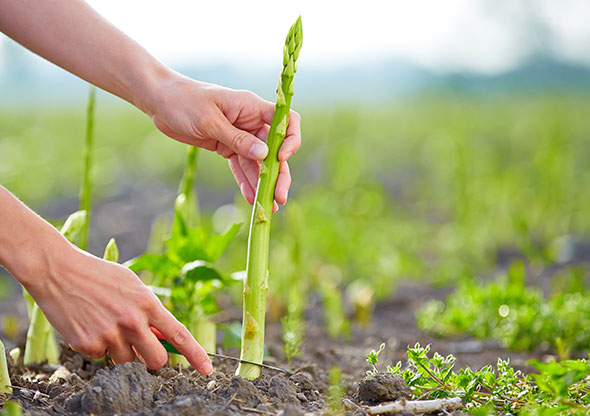 Exporting a high percentage of the world’s fruits and vegetables, Peru’s farmers and food manufacturers require a high degree of logistics and transportation support for their perishable products.

As the second largest exporter of fresh asparagus worldwide, Peru exports 33% of the herbaceous, perennial plant every year. Used in a wide variety of tasty dishes, this low-calorie, low-sodium vegetable is prepared in many different ways and eaten by people around the world.

To make sure those diners get the freshest and tastiest asparagus roots, growers in Peru export fresh (73% of exports), canned (21%), and frozen (6%) iterations of the vegetable. Having displaced both China and the U.S. as top producers of asparagus, the country is recognized worldwide for the quality of its product.

“This is due to the mild temperatures and low rainfall in the coastal areas of the country,” says Luis Loaya Mariño, Perishable Manager for DB Schenker Peru, “which have an ideal climate for the cultivation of asparagus throughout the year.”

In 2017, total world exports of asparagus will reach $540 million (USD), a 6% drop-off from 2016. The decline is due to the increase in temperatures as a consequence of the El Niño phenomenon, which affected product yields for the first half of the year. The dearth of product pushed fresh asparagus prices up in both 2016 and 2017.

Destined for different markets around the world, Peru’s asparagus goes primarily to the U.S. (70% of exports); the Netherlands and the United Kingdom (16% each); and Spain and other countries (14%).

According to a U.S. Department of Agriculture (USDA) report (Census of Agriculture. Farmers and Ranchers), by 2018 the Peruvian asparagus crop is on track to increase by approximately 3%, due primarily to an increase in the areas sown and an improvement in yields. When this happens, asparagus exports from the country will reach $550 million.

“The growth of the Peruvian economy in recent years has been characterized by a variation in the extractive sectors,” Mr. Loayza explains. “In this process, the development of agribusiness, mainly export and generating employment, has been achieving an increase in the productivity of the regions involved and therefore, better levels of development.

In Peru, asparagus agriculture is a vital job generator—and much more important than other traditional crops in the areas, such as cotton, corn, or rice. In addition to the jobs generated in the industry, asparagus activity provides the country with an estimated 50,000 decentralized jobs along the Peruvian coast (60% of which involve women), an important fact in the search for equality of job opportunities. The industry’s success has been transferred to other products such as artichokes and piquillo peppers, both of which leverage the installed capacity of the agroindustry. The latest projection of the Peruvian Institute of Asparagus and Vegetables (IPEH) estimates that by 2018, approximately 10,000 new jobs will be generated for the sector.

To support this vital and growing industry, DB Schenker Peru helps growers secure their shipments to their final destinations on time, and in a way that optimizes the cold food chain.

“Currently we’re not only handling the logistics and transportation for the fresh asparagus,” says Mr. Loayza, “but also for other perishable products, such as foliage, arils of Granada (pomegranates), cranberries, avocados, snow peas, and mangoes, among others.”

Achieving that goal isn’t always easy for the logistics provider, which has to compete with other industries for warehouse space and trucking/air capacity. Chile, Colombia, Argentina, and Brazil, for example, are all wine-producing countries that require high amounts of capacity between August and January—right around the same timeframe when asparagus is picked, packaged, and shipped.

“Finding warehouse space during those peak months has become a big challenge for freight forwarders,” says Mr. Loayza, “so it is important to negotiate with our carriers to have the allotments in place and to be able to meet our customers’ agreed-upon shipment times.” DB Schenker must also maintain the cold food chain, both in terms of the reception of the cargo and in the departure of the warehouses of the airline. To meet the requirement, the company maintains two refrigerated warehouses in Lima (Cool Air and Talma), both of which are located in “primary zones,” and that incorporate security measures to prevent drug trafficking.

A colorful fruit that’s well known for its health benefits, pomegranate is another key export for Peruvian farms. Currently one of the main logistics operators for the transportation of pomegranates being shipped from Granada to New York and Los Angeles, DB Schenker has in place an end-to-end process for ensuring the fruit’s freshness as it makes its way through the cold food chain.

Due to its high perishability, for example, the pomegranates’ temperature must maintain the parameters requested by the customer in order not to damage the fruit. For the transfer to the final destination, the logistics provider uses gel packs to maintain the load while also closely monitoring transit times. “We’ve been doing this for the last five years, during which time our shipper-customers have watched their annual sales increase year-over-year,” says Mr. Loayza.

As Peru increases its exports of various fruits and vegetables, including blueberries—a market that DB Schenker recently began serving—the company is increasing its presence across that and other national products.

Important crops that not only feed the world, but that also provide employment for a high number of Peruvian workers, the country’s fresh fruits and vegetables are now making their way into Asian markets due to rising product value and higher demand. “As we move into 2018, we’ll be specializing in the logistics to these new destinations,” says Mr. Loayza, “with a focus on managing the cold chain across even longer distances.”