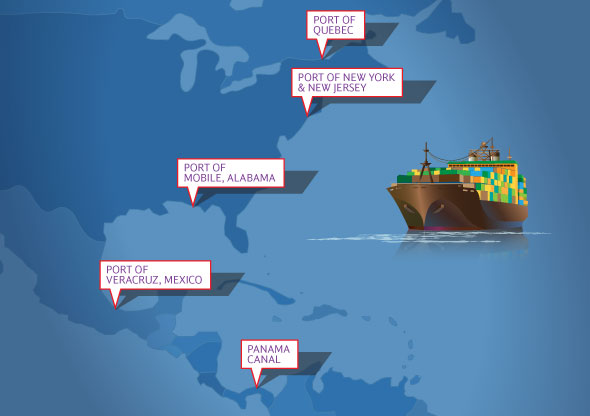 Nearly 2 years since the Panama Canal expansion, the effect on East Coast trade is dramatic.

Now that the Panama Canal has been able to accommodate container ships up to 14,000 TEUs for almost 2 years, some interesting patterns are beginning to emerge. In 2017, imports to East Coast were up nearly 8% — more than double the growth of their West Coast counterparts. This shift in trade volume from West to East is having a noticeable effect on ports large and small, from Quebec, Canada in the north, to the Port of Veracruz, Mexico in the South. Here are some examples:

Port of New York/New Jersey: Last September, the first “mega ship”, the 14,4000 TEU CMA CGM T. Roosevelt arrived — the largest ship to call at the port after the Bayonne Bridge was raised last June. Previously the port was limited to 9,500 TEU ships or less. It’s hoped that the ability to accept New Panamax ships will help the port retain it’s dominance as the East Coast’s busiest port, even as it’s lost market share over the last few years to southern ports: labor union issues, congestion, unpredictable turn times, and high rents have taken a toll on the port’s competitiveness. Bringing in even larger ships could potentially make the situation worse. JOC quotes Thilo Trusch, senior director of trade management Atlantic for Hapag-Lloyd, who says “We actually see a lot of shippers looking for alternatives. We see that customers are trying to find options to New York in the expectation that something bad might eventually happen there.” Considering its options, the state of New York is investigating the feasibility of building an inland port in New Jersey, Pennsylvania or Upstate New York, anywhere from 45 to 260 miles away from the port.

Port of Quebec: A little over 500 miles drive to the north of New York City (but 1600 nautical miles port to port) is the tiny Port of Quebec. Unlike its larger counterpart some 180 nautical miles up the St Lawrence River, the Port of Montreal — which had a container volume of nearly 1.3 Million TEUs in 2016 — Quebec doesn’t even publish container figures! The Quebec Port Authority is looking to change that in a big way, stating its intent to build a $400M container terminal capable of accommodating 20,000 TEU container ships. The Port Authority cited their 15 meter (49ft) max depth as a key advantage (Montreal’s max depth is reported to be 11 meters or 36ft) as well as their proximity to U.S. manufacturing.

Port of Mobile, Alabama: On the U.S. Gulf Coast, the Port of Mobile is accelerating its $49M expansion of the port from a TEU capacity of 500,000 to 650,000 as they brace for the opening of a new 2.6M Sq Ft Walmart Distribution Center. Imports to the port were up 17.4% in 2017, and it has already surpassed the Port of New Orleans in volume for the #2 spot on the U.S. Gulf Coast (after Houston). Ultimately the port plans to expand to a capacity of 1.5 million TEUs, though no date has been set for the final phase.

Port of Veracruz, Mexico: Gulf Coast ports on the Mexican side enjoyed a staggering 17.6% increase in 2017, which was reflective of a 12% trade increase across the country. The Port of Veracruz lead the pack, with 1.1 Million TEU, an increase of 15.7% for the year, thanks in large part to the Panama Canal’s. The Mexican Government has pledged a whopping $3.3 Billion investment into the port by 2024. Whether that will be enough to steal the #1 spot from the Port of Manzanillo on the West Coast, who also enjoyed a 10% increase in 2017, remains to be seen. Meanwhile strong demand for Mexican products in the U.S. (which consumes 81% of $374B in Mexican exports) as well as a strong Euro and growing demand in Europe (which imports $20.3B from Mexico yearly) ensures that the Port of Veracruz will continue to play a strategic role in Mexican trade.

It’s clear that the ability to move nearly 50% more cargo per ship through the Panama Canal is yielding dramatic results. Ports on the East and Gulf Coasts are scrambling to accommodate the larger ships — and the increased cargo volume they bring. While the West Coast will continue to dominate trade with Asia for the foreseeable future, this shift to East Coast ports is a real trend, and ports that are able to most efficiently handle the added volume will definitely continue to benefit.