A Central American country stretching from Costa Rica to the west across to its southeastern border with South America’s Colombia, the Republic of Panama ships $11.2 billion (USD) worth of goods around the globe every year. 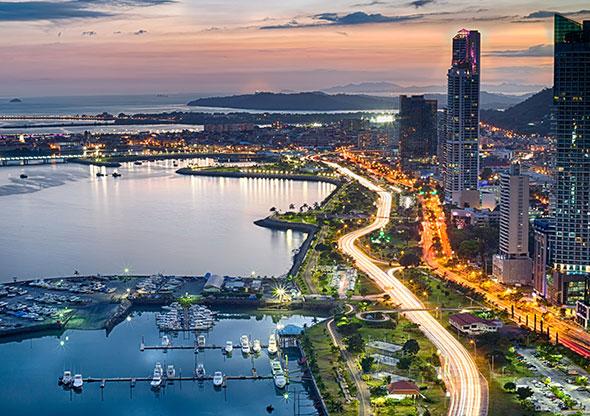 Roughly three-quarters (64.4%) of Panamanian exports were delivered to Latin American countries, while another 23.7% were sold to North American importers (followed by 4.1% for European buyers and 3.2% for customers in Asia).

With a population of 3.8 million people, Panama’s annual $11.2 billion in exports translates to roughly $3,000 for every resident in the Central American nation.

“Companies around the world rely heavily on the goods and services that Panama produces and ships,” says Edgar Urrutia, managing director of DB Schenker in Panama. “A major trading partner for the U.S., Panama—and the critical Panama Canal waterway—play critical roles in the world’s supply chains.”

A Critical Waterway: The Panama Canal

Panama’s thriving export business can largely be attributed to the strategic location of the Panama Canal, a critical waterway that was recently dredged, enhanced, and expanded. Before the expansion, vessels passing through the canal were limited to capacities significantly below 5,000 TEU. Larger container ships were forced to travel west and circumnavigate Africa’s southern tip. The longer route added cost, time and far higher levels of CO2 emissions.

Open since mid-2016, the canal’s recent $5.25 billion expansion is its largest-ever enhancement project in its 102-year history. According to Inbound Logistics, the heart of the ambitious undertaking was the construction of a new set of locks on both the Atlantic and Pacific sides of the waterway and the excavation of more than 150 million cubic meters of material.

The resulting new lane of traffic doubles the cargo capacity of the canal, the publication reports, noting that the new locks are 70 feet wider and 18 feet deeper than the original portion of the canal.

“The new set of locks basically tripled the capacity of the old ones. Therefore, shipping lines can use bigger ships, thus reducing their costs,” says Urrutia. “This will also reduce the shipper’s expenditure on logistics. It will also create more business opportunities, with the primary impacts being felt in trade lanes from Asia to the east coast of North America.”

Urrutia expects the expanded waterway to continue playing a crucial role for DB Schenker Panamá, with roughly one-third of shippers using it for their ocean freight. “I believe that in light of the more cost-efficient transit, the construction of a new port on the Pacific side, and the development of new logistic free trade zones, more business opportunities will open up using Panama as a regional hub.”

According to the American Journal of Transportation’s  Expanded Panama Canal performance exceeds expectations, the Panama Canal has attracted 15 new liner services and welcomed an average of six Neopanamax daily transits.

“The impact of this strong performance has been reflected in other parts of the world as well, principally in the ports of the East Coast of the United States,” AJOT reports, “which are in various stages of deepening and expanding their channels to meet the growing number of Neopanamax vessels now transiting the Canal.”

According to the Journal of Commerce, more companies are recognizing the potential for Panama to become a center for distribution throughout Central America, with some beginning to locate manufacturing and distribution capabilities in the country, where they can be closer to many of their customers.

Depending on the specific company’s supply chain, a presence in Panama may offer an alternative means for manufacturing their products closer to their destination. St. Paul, Minnesota-based 3M, for example, relocated its production lines of after-market paint guns, polishing equipment, and other automotive-sector equipment from Asia and Mexico to Panama.

And for medical equipment manufacturer Covidien, Panama offers a lower-cost alternative for repackaging some products made in the U.S. but destined for Latin America, JOC reports. Finally, computer maker Dell now operates a shared-services center at Panama Pacifico that provides services for its human resources and financial services departments, and technical support for its finance department.

A Fast-Growing Economy, With More to Come

Calling Panama “one of Latin America’s fastest-growing economies during the past decade,” JOC says the country’s real GDP expanded by an average 8.4 percent annually between 2004 and 2013. The sectors that will enjoy the strongest growth are construction, mining, transportation, and real estate, the publication notes.

“An emerging region with significant potential, Panama is literally the gateway of the Americas,” says Urrutia. “Its economy and logistics infrastructure are both growing faster than other areas of the world. We’re excited to be a part of it.”

The World’s Most Important Freight Port