The Port of New Orleans: A Vital Gateway for Inland Logistics

The Port of New Orleans serves as a vital gateway for inland logistics connected by 14,500 miles of inland waterway, interstate roadways and six class 1 railroads.

A diverse deepwater port, Port NOLA is uniquely located on the Mississippi River near the Gulf of Mexico. With access to 30-plus major inland hubs such as Memphis, Chicago and Canada via 14,500 miles of waterways, six Class I railroads and interstate roadways.

The Port is a driver of the economy for the state of Louisiana and the United States with its four lines of business cargo, cruise, rail and industrial real estate.

Port NOLA set records for container traffic and freight volumes by surpassing the 500,000 twenty-foot equivalent unit (TEU) threshold for five years in a row. Port NOLA also moved more containers in fiscal year 2019 than at any time in its history at its Napoleon Avenue Container Terminal – totaling 619,353 TEUs, up 12% from the previous year.  Port NOLA has now seen double-digit growth in total container volumes for two consecutive years, led by loaded import growth which was up 7.3% in fiscal year 2019.

As the only deepwater container port in the state of Louisiana, Port NOLA continues to attract new services and ocean carriers that include all three major mega-container carrier alliances. Port NOLA features 11 weekly container services from three major global alliances as well as independent carriers, with direct connections to 58 global ports and more than 450 others through connecting services.

Most recently Port NOLA has attracted a new direct-Asia container service. MSC’s Lone Star Express service which will call weekly at Port NOLA later this month. The new service further strengthens New Orleans’ direct connectivity with Far East markets and offers more options to the Port’s customers. This will be the second direct-Asia service via New Orleans in addition to CMA CGM’s PEX 3 service. Maersk and ZIM will both partner on the new Lone Star service, which will appeal to resin producers and traders, furniture and other retail importers, as well as temperature-sensitive goods – especially frozen poultry because of fast export transit times, such as 25 days from Busan, Korea, and 32 days to Busan.

“Asia is our fastest-growing containerized trade lane, and we appreciate the commitment from our ocean carrier partners to Port NOLA and our shippers,” said Port NOLA President and CEO Brandy D. Christian.

To effectively manage growing container volumes, Port NOLA has embarked on a $100 million expansion plan that includes the order of four new 100-foot gauge container gantry cranes that can more efficiently work larger ships in the 8,000 to 9,500-TEU range.

“These cranes will be Louisiana state assets that produce jobs, provide economic output and keep Louisiana among the most competitive seaports in the United States,” said Christian.

There is continued optimism on the breakbulk side as there has been an uptick in wind energy-related cargo due to the production and investment tax credits for wind energy, as well as nonferrous metals and natural rubber.

Christian also highlighted the petrochemical boom in Southeast Louisiana that is fueling container exports of plastic resins that is also contributing to project cargo volumes from expansion projects up the Mississippi River.

Intermodal growth was up 22.7% in fiscal year 2019, fueled by the new KCS direct service between New Orleans and Dallas.

“Since the Port acquired the New Orleans Public Belt Railroad in 2018, we have been fully integrated and we are already seeing the benefits of synergy,” said Christian. “Ownership of the NOPB shortline railroad gives Port NOLA a significant competitive advantage, providing stability and true logistics integration for our Class I rail partners and shippers.”

“Port NOLA is currently innovating where we see opportunity,” says Christian. “We’re growing the country’s largest container-on-barge service, in partnership with the Port of Greater Baton Rouge, and SEACOR AMH.” 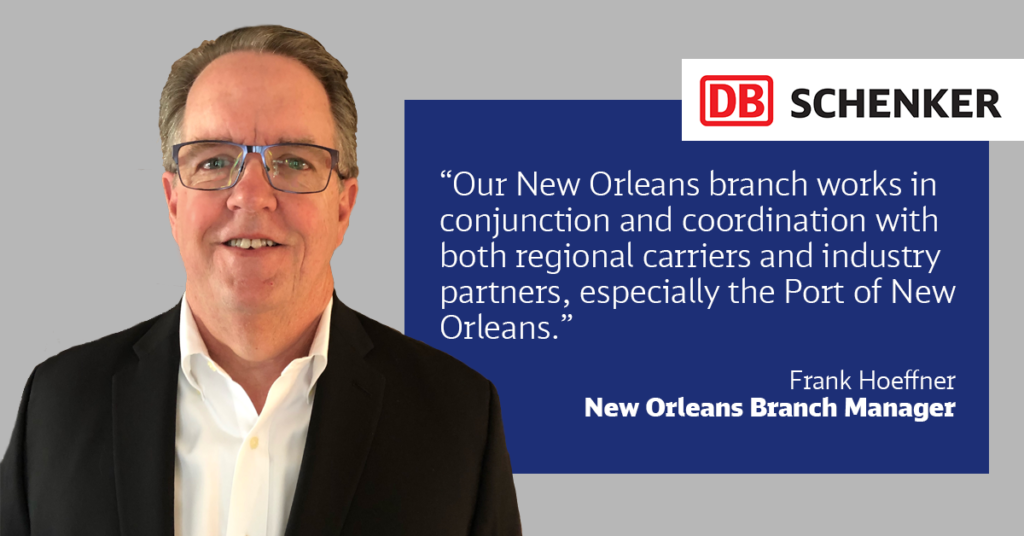 Focused on driving economic prosperity throughout its tri-parish jurisdiction (Jefferson, Orleans, and St. Bernard), Port NOLA collaborates with state and local partners to ensure that it continues to be a vital link to the world for businesses and consumers — throughout Louisiana and beyond. Its Strategic Master Plan, provides a bold vision that paves a path forward to ensure that Port NOLA meets market demand to lead the region to greater sustained prosperity.

Port NOLA continues to be a major economic driver that generates a wide range of well-paying jobs and supports a stable, diverse and strong economy for the state of Louisiana. A recent economic impact study conducted concluded that Port NOLA, a multi-billion-dollar multimodal gateway for international trade and a bustling embarkation port for cruise passengers, creates and supports more than 119,500 jobs and $29.8 billion of economic output.

There is increased opportunity for industrial real estate throughout the Port NOLA jurisdiction, and a broader lens is being used to examine new freight-related businesses and grow current ones in all three parishes.

“Port NOLA is proud of the work the men and women do in our industry on a daily basis to drive prosperity regionally and nationally,” said Christian. “Each day we are working to fully realize the region’s potential on and off Port property. To accomplish this we are working with regional, state and federal partners to attract new freight-related jobs and to build and support Louisiana’s logistics industries.”

Frank Hoeffner, New Orleans Branch Manager at DB Schenker summed it up, “Our New Orleans branch works in conjunction and coordination with both regional carriers and industry partners, especially the Port of New Orleans.” That is the foundation for success and why NOLA is such a vital gateway for inland logistics.

Technological Innovations in the Supply Chain. What You Need to Know.