This article by Patrick Burnson originally appeared in Logistics Management. 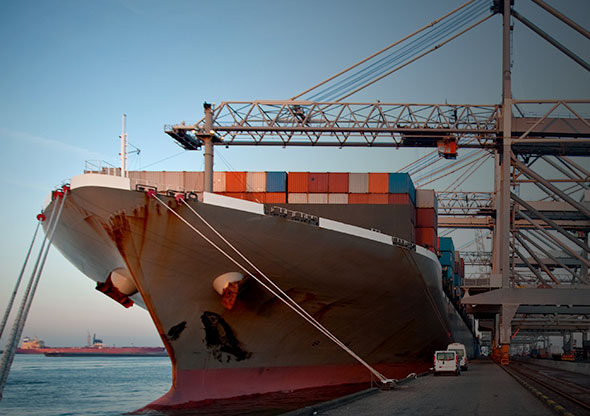 The collapse of Hanjin in 2016 fueled speculation that new players might be emboldened to enter the “top tier” and begin competing for market share. With this, logistics mangers putting container shipping to work are facing the biggest shift in their carrier base in 20 years—and now must adapt their procurement and contract strategy.

Furthermore, this transition is driving growth and pushing business performance figures from “deep red into black,” says Patrik Berglund, CEO of Xeneta. He cautions, however, that carriers must continue to watch their spending. “Long-term rates are in some cases up by triple digits year-on- year,” he says, “in further proof that the recovery of the container shipping market is is well underway.”

Berglund points to Maersk’s recent 2017 second quarter financial report indicating that higher freight rates propelled revenues upwards by 8.4% to almost $10 billion for the quarter. At the same time, Hapag-Lloyd may be on its way to triple its earnings this year.

Strong consumer demand, the restructuring of industry alliances (90% of all container ship traffic is now accounted for by THE Alliance, OCEAN and 2M) and Hanjin’s demise all help push up utilization and rates, Berglund adds. “We remain optimistic with regards to the remainder of 2017, but the longer term becomes more complex, as more mega vessels come into deployment,” he says. 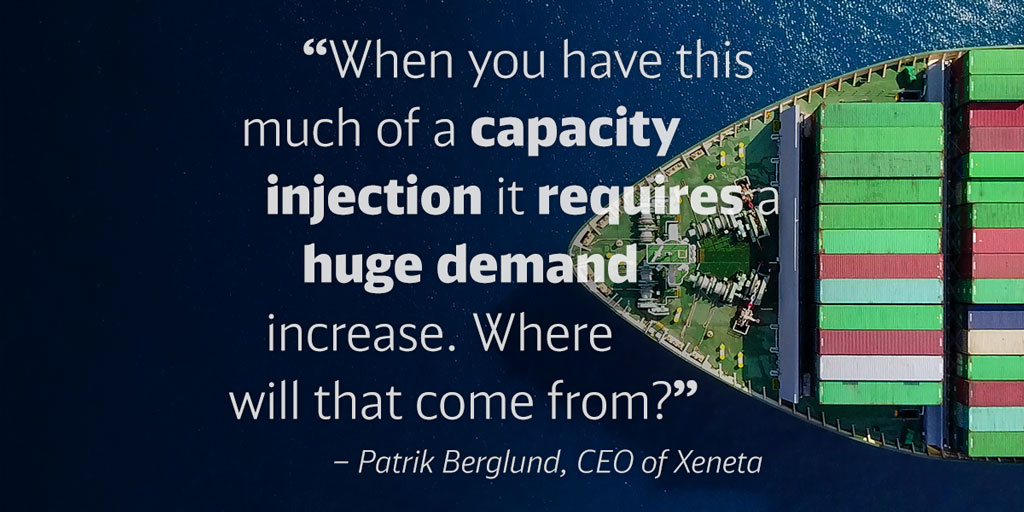 Berglund observes that a staggering 78 new “mega-ships” are due to come online for the Asia- Europe trades over the next two years, pushing capacity up by over 23%. “Mega-ships make obvious sense in terms of economy of scale and optimizing transport costs,” he says, “but when you have this much of a capacity injection it requires a huge demand increase. Where will that come from?”

Analysts agree that mega-ships of 18,000 twenty-foot equivalent units (TEUs) must command utilization rates of at least 91% to achieve cost savings. Even in the high volume Asia-Europe trades that’s difficult, and may necessitate lower than average rates for some volume, which, inevitably, will hit overall rate development.

“Each of the key alliance partners is playing catch-up with one another, trying to reap the mega- ship benefits,” adds Berglund. “In doing so, they’re going to flood the market with new capacity and risk reversing current positive trends. This is a potential mega-problem in waiting.”

Chris Rogers, an analyst with Panjiva, an online search engine with detailed information on global suppliers and manufacturers, observes that another risk lurking for the carrier industry is that some nation states will commence a new round of low-cost capacity construction. “That in turn could result in an oversupply of vessels and a new round of troubles for the container industry,” he says.

According to Rogers, only a handful of carriers have contracted—including Hyundai Merchant Marine and Hamburg Sud—through a mixture of not replacing older capacity and foregoing chartered vessels. “My general view on the ocean carrier sector right now is that it appears to be out of the woods financially, but a continued recovery depends on discipline in ordering new capacity being maintained,” he says. “That’s far from a given right now.”

This leads Rogers and other market analysts to conclude that logistics managers must pay close attention to the market if they seek the best rates for their assets, services and shipments.

Panjiva notes that container lines operating on U.S.-inbound routes had another month of growth in August, led by COSCO Shipping and Hyundai MM that both expanded 31% during that month. Remarkably, MSC grew its handling by 12%. That may have come at the expense of Hapag-Lloyd, which dropped 7% over that period of time as it integrates its UASC acquisition. Panjiva analysis of over 4,100 carrier-country pairs shows Hapag-Lloyd likely lost out on European-based routes. Maersk saw a 3% drop in volumes in the same month likely due to a loss of market share to resurgent Asian shippers on Pacific lanes. Hamburg Sud, which is being bought by Maersk, saw a 12% drop potentially reflecting weak Mexican and Latin American volumes after Hurricane Harvey and Hurricane Irma.

The process of consolidation certainly continues. The upper echelon of carriers, following the current round of acquisitions and mergers, would have had a 39% market share in the past quarter, up 3% points on a year earlier.

The COSCO/OOCL merger will not be signed until COSCO Shipping Holding holds an extraordinary general meeting during the middle of this month. The combined entity—if the merger is completed—would become the world’s third largest container carrier. Specifically, the duo would have a combined fleet of 400 vessels operating over a much-expanded network, with the capacity exceeding 2.9 million TEUs including order book, pushing CMA CGM from its current spot.

Meanwhile, COSCO Shipping Lines and OOCL will continue to operate under their respective brands, providing both container transport and inland logistics services.

One of the more surprising developments in today’s ocean cargo marketplace has been the emergence of a major new player in the trans-Pacific. The sustained period of lower fuel costs and second-hand vessels provided South Korean carrier SM Line to enter the fray. Founded in December 2016, SM Line is part of South Korea’s Samra Midas Group, which has its main interests in manufacturing and construction, but has also had previous shipping involvement through its ownership of bulk carrier Korea Line Corporation.

Then came the purchase of 11 Hanjin ships at discount prices and two key Hanjin terminals in Gwangyang and Incheon, South Korea. And once having gained the approval of the Federal Maritime Commission (FMC) in April, SM Line commenced a one-loop Asia to U.S. West Coast service, deploying five 6,600 TEU vessels into the trade.

Drewry further notes that international transport and logistics executives using container shipping are now facing the biggest shift in their ocean provider base in 20 years and must adapt their procurement and contract strategy. In the last five years, shippers have been able to secure large reductions in freight costs by running traditional competitive bids with numerous providers in an over-supplied, fragmented market. “But today’s business environment is starkly different, so we’re now pro-actively advising shippers that last year’s contract strategy will simply not work as a blueprint for the forthcoming annual ocean tender,” says Philip Damas, head of Drewry’s logistics practice, who adds that things will be different and organizations must be prepared. “Rapid consolidation in the supplier base, changes in supplier behavior, huge reductions in vessel orders and new developments in tender technology will bring real change and uncertainty to the ocean transport procurement environment,” says Damas. For example, on the Asia-North Europe route, the number of containership operators—excluding slot charterers—will decrease from 15 in July 2016 to 11 in July 2017 to just eight in July 2018. Globally, in 2016, orders for new containerships decreased from $17 billion in 2015 to $2 billion in 2016.

On the other hand, the capacity of new containership deliveries is expected to increase from about 900,000 TEUs in 2016 to 1.1 million this year. The bankruptcy of Hanjin Shipping in 2016 has highlighted the performance risks of some financially weak providers, and some shippers and ocean carriers are experimenting with new contractual models.

According to Damas, annual contracts being renegotiated on the Asia-North Europe and Asia- U.S. West Coast routes are typically seeing container annual freight rate increases of about 50% (although from a low base). In such a market, Drewry believes that logistics managers will need to re-think their contract negotiation strategy and, by incorporating benchmarking and e- sourcing best practices in their tender management process, rate increases can be mitigated. “Use of Big Data and optimization can also help find the best combination of bids to meet the intended balance between cost and service for the shippers many different lanes or supply chains,” says Damas.

Shippers could also face more frequent potential issues from roll-overs and cancelled sailings in the medium term. In early 2017, European exporters suffered shortages of export shipping capacity to Asia at a time when quarterly volumes to China were running 18% higher than in the first quarter of 2016.

Dan Smith, a principal with the freight transportation consultancy firm Tioga Group, likens the current situation to a Rubik’s Cube, with a jumble of boxes begging for reconfiguration. “Logistics managers want to see a consistent and sustainable solution to this puzzle,” he adds. “With the introduction of mega-ships into the equation, carriers have created issues for ports, terminals, drayage firms, and the communities and regions from which they operate.”